If you've ever had a chance to witness or meet a Mormon Missionary, I'm sure you have found that they are a unique character (for lack of a better word). These young men and women believe so much in their religion, that they leave their homes for 18 months (women over 21) to 2 years (men over 19). Why is it that there are so many of these missionaries all over the world when we are having a difficult time keeping our youth interested in church? (there are quite a few good books on this topic of youth and Christianity, I'm not touching it in this post).

There are a number of things that attribute to the desire of youth to become missionaries in the Mormon church. For those of us that were raised in the church, we were taught how wonderful it was going to be to go on a mission. Our grandparents, parents, cousins, friends, etc. all talked about how great their missions were and intrigued us on how neat it would be to serve half way across the country or world even.

We were given saving boxes in church that had three slots in it. One for Tithing, one for Savings, and one for Missions. Typically you were to put 10% of your allowance, etc. into each section. I have to admit, I was never very good at saving money so my box was usually pretty empty. In order for me to go on my mission, my dad paid the cost of my mission. Others pay for their own out of their savings. Even others are sponsored by individuals in the church who are willing to help those who can't afford the costs.

At the time I served my mission, everyone paid the same amount into the mission fund every month (I believe it was roughly $325ish). That money was then placed in a mission fund and divvied out among all missionaries around the world based on costs of living. While I was in Russia, my monthly allowance was $200 (roughly 1,000,000 rubles at the time I was there). Our travel and rent also came out of this general missionary fund.

This way we could easily say that there were no paid missionaries in the Mormon church. It became a uniqueness that we were proud of. Again, work righteousness we were taking care of our own way and not relying on the church to provide for us (in most cases).

Another bonus was that we knew we would not be called to serve in the state where we lived. I remember when I opened my "call" letter. I did not know where I was going to be sent. No missionary in the Mormon church selects where they will serve. It is chosen for you at the First Presidency level (so we were told, not sure how accurate it is...). Anyway, my brother was sitting at the table when I was opening and trying to read my letter. I was so excited to learn where I was going.

When I found where it stated that I would be serving in Russia, I started screaming at the top of my lungs. My poor brother had to cover his ears I was so excited. In fact, I think my entire apartment building heard me screaming. The reason I am sharing this is to help you understand how important these "calls" are to Mormons. A mission ranks right up there with a wedding (for a girl).

"According to the grace of God which was given to me, like a wise master builder I laid a foundation, and another is building on it. But each man must be careful how he builds on it. For no man can lay a foundation other than the one which is laid, which is Jesus Christ."
1 Corinthians 3:10-11
Posted by Teri Campbell at 7:10 PM 1 comment:

Isn't it funny how many "Christian" things there are right now? Christian books, Christian blogs, Christian businesses... you get the idea. I started thinking how easy it is to slap the word "Christian" on something to open up a whole new market. As long as the items are "family friendly" who cares whether they are 100% biblical right?

I guess right now I am on this kick because I've been listening for what passes as "Christian" radio on my drives to work lately. Honestly, I think traffic irritates me less than some of the songs that play on the radio right now. For instance, "I'm free to be me and you're free to be you." Really? Where is that in the bible? Holy jeans aside, I wonder what that artist is thinking. The biggest reason I've even tuned in lately is because recently "The Revelation Song" has become popular. Talk about worship!

Next have you listened to some of the commercials that are played? I think that might be a topic for another day, but if I hear one more commercial about the homebased business expo, I think I will scream (nothing against home-based businesses, the station has just had some weird commercials).

Okay, I'm going to get off my rant now. However, I posted a Grace Gems devotion that I felt was appropriate for this topic right before this post.
Posted by Teri Campbell at 5:43 PM No comments:

There is but one standard of true Christian character

Nothing is more striking to a close observer of human life, than the almost infinite variety of character which exists among those who profess to be Christians. No two are alike. Even those who are alike revered for their saintliness, who alike seem to wear the image of their Lord, whose lives are alike attractive in their beauty--show the widest diversity in individual traits, and in the cast and mold of their character. Yet all are sitting before the same model; all are striving after the same ideal; all are imitators of the same blessed life.

There is but one standard of true Christian character--likeness to Christ. It is into His image--that we are to be transformed; and it is toward His holy beauty--that we are always to strive. We are to live as He lived. We are to copy His features into our lives. Wherever, in all the world, true disciples of Christ are found--they are all trying to reproduce the likeness of their Master in themselves.

One reason for the diversity among Christians--is because even the best and holiest saints realize but a little of the image of Christ, have only one little fraction and fragment of His likeness in their souls. In one of His followers, there is some one feature of Christ's blessed life which appears; in another, there is another feature; in a third, still a different feature. One seeks to copy Christ's gentleness, another His patience, another His sympathy, another His meekness.

Therefore, a thousand believers may all, in a certain sense, be like Christ--and yet no two of them have, or consciously strive after, just the same features of Christ in their souls. The reason is, that the character of Christ is so great, so majestic, so glorious--that it is impossible to copy all of it into any one little human life; and again, each human character is so imperfect and limited--that it cannot reach out in all directions after the boundless and infinite character of Christ.

Care of Grace Gems
Posted by Teri Campbell at 7:38 PM No comments:

The past two months have been so busy around here. During our Wednesday night children's bible study, we are learning about different missions around the world. I have had the opportunity to lead many of these sessions. It has been so neat watching the childrens' hearts turn toward the missionaries working out in the fields.

My prayers are with my brother that God opens his eyes to the fallacies he is teaching as He did with me. I also am praying that the people who I misled in Russia might find the truth and in turn find Jesus.
Posted by Teri Campbell at 5:22 PM 2 comments: 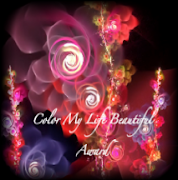